The Mother of All Archetypes: The Original Fire

A Proposal by Dr Bruce Copley

The AfrikaBurn gathering offers everyone an unforgettable experience because in stark contrast to most other gatherings it, slays the status quo, champions creativity, confronts conformity and accosts apathy. With the incredible amount of creativity, planning, passion and vision generated by this uniquely co-created event it is difficult to imagine what could be done that could radically transform the entire event into a truly extraordinary occasion. 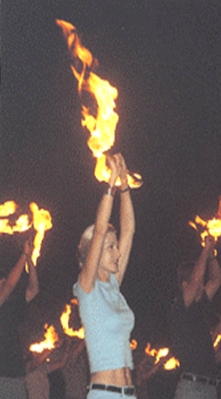 As is so often the case when we are unable to see the wood for the trees because we are so caught up with conventional approaches to creativity, planning and envisioning, the solution very often lies right under our noses.

The AfrikaBurn event obviously hinges around fire and a return to a 6-day experience of communal learning, living, working, playing and loving that was such an integral part of the lives of our ancestors upon whom shoulders we stand today. In fact the use of fire as a tool dates back to around 1.5 million years ago to what was unquestionably constituted the greatest discovery in the history of our species. The history of humanity and fire are inextricably bound to one another. It is an age-old bond or relationship man had with fire which resulted in a modern need to return to fires comfort deep within the Psyche of man. Fire resulted in the evolutionary development of man and can be witnessed as an environmental presence, an ecological process as well as an evolutionary force. Fire connects us to the past, forges a reverence for the natural world, and brings back feelings of connectedness that have been lost.

What is required to very simply but powerfully transform AfrikaBurn into a truly extraordinary gathering is to introduce the ancient and mystical ORIGINAL FIRE. The 2013 Afrikaburn theme is Archetypes, and the Original Fire is the mother of all archetypes. Since 2005 I have been passionately teaching tens of thousands of people all over the world ranging from 6 year old children to senior citizens how to create the original fire using the ancient and largely forgotten stick friction method. There are 2 methods we use: the relatively quick and easy BOW method and the more challenging HAND DRILL method. 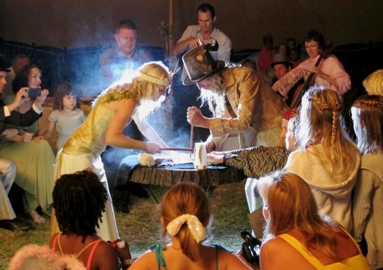 HOW COULD THIS BE DONE AT AFIKABURN?

Using AfrikaBurn's 'gifting' practice my offer is to teach a core group of AfrikaBurn staff eg fire staff how to make the original fire using both methods. They would then teach groups of around 50 interested people (25 pairs) attending the festival how to make the original fire. Each of these people in return could then 'pay it forward' and teach other small groups. In this way the original fire would spread exponentially and be something all interested people could learn to do....exposure to this precious and ancient gift. In addition to this it would be ideal if all the 2013 Afrikaburn fires but especially the final big burn could be with flames sourced from the original fire.

In all likelihood this would be a first in South Africa and possibly in the world. I would be able to provide 100 kits required to do this.

In our primeval past fire protected us from our greatest fears both real and also imagined
In the darkest caves where once we trembled and shivered fire now gave us strength
By the light of fire we created
Through the light of fire we drew supremacy over nature for no longer were our waking hours prescribed by the rising and the setting of the sun
Always there was fire especially the fire within our souls
What has made us who we are today is the burning desire to succeed, to win against all odds
This is the fire of our passion
When we ignite our internal or external fires with this passion, everyone will come to watch

Bruce Copley (Keeper and Creator of The Indigenous Original Fire)

A short summary of what we actually did at the festival:

1. The following 3 burns were ignited on Sunday night(5 May 2013) using the Original Fire:

To my great delight Liesel, one of my Original Fire Afrikaburn graduatees, lit this fire. She practiced her technique to be able to light her friends red Lotus flower. Witnessing her doing this without my standby assistance was a great thrill for me because this is exactly what I was hoping would happen, namely learning the technique and then sharing it with others. We used the cello, didge and dancing to create a special acoustic atmosphere during this burn.

I lit this fire after a short music/dance intro with cello by Barbara Kennedy, dancing by Dana Orlinka and yours truly on the Didgeridoo. What made this burn so visually unique was that the structure itself was fire flame shaped.

This was one of the big burns and certainly a highlight for me as I held the Original Fire aloft and ignited this work of art. Courtney Ward, a close friend, delightfully surprised me by playing her didgeridoo while I was creating the fire. The official brochure invited burners to come to the Grateful Heart for a NEW PERSPECTIVE...I hope that this is what happened for many mindful burners who witnessed this spectacular event.

Afrikaburn 2013 - Mother of all Archetypes: The Original Fire comes home to to the Grateful Heart Burn. Background music by Bruce's son Donovan Copley from Hotwater.

2. In addition to these 3 burns we also demonstrated the Original Fire in the following settings:

d. 2 Public events in the Pyramid Structure in the Binnekring


3. The following items were also gifted to interested burners:

b. 80 Lekolilos or African penny whistles

e. A selection of CD's and DVD's


4. Was such a pleasure meeting Simon Max Bannister, Duncan Greenwood and Carl Du Preez. We loved sharing our fire and music with these wonderful souls and members of their teams.

5. We received many wonderful compliments and thank you's. A number of regular burners told us that the Original Fire was a festival highlight because the Afrikaburn 'missing link ' had been found and at last it was where it really belonged.


Thanks once again, and here's hoping that enough seeds(embers) were planted to ensure that the Original Fire becomes an integral part of all future Afrikaburn events.