An Australian scientist is using a state-of-the-art brain imaging machine to investigate the complex physics involved when playing the didgeridoo, the ancient but extremely complex wooden musical instrument developed by the Aborigines.

For many South Africans, the sound of Australia is - unhappily - probably Shane Warne's raucous appeal as yet another Protea batsman succumbs to his unfathomable leg-breaks. But the real sounds of Australia are the haunting, evocative tones of the didgeridoo, the traditional instrument developed by the Aboriginal communities from a small, hollowed-out tree trunk.

face value, and despite the beautiful Aboriginal motifs which usually adorn these instruments, the didgeridoo looks decidedly primitive and simple. Yet, as anyone who has tried to play one knows only too well, it is highly complex and difficult. Now Australian scientist Lloyd Hollenberg has started researching the equally complex science behind the sound produced by this ancient instrument.

Hollenberg is a professor of theoretical physics at the University of Melbourne. He normally works on subatomic particles and the development of quantum computers, but, in collaboration with three other researchers at the Australian National University and the University of New South Wales, he recently received an Australian Research Council "Discovery" grant to study the acoustics of the didgeridoo. Hollenberg points out that many cultures use pipe instruments such as bamboo, conch shell and brass, bronze or copper horns, but that the didgeridoo is considered unique in terms of its musical complexity.

"Australian Aboriginals have advanced didgeridoo beyond the pipe music of probably any other culture, yet nobody has thought to find out in detail how this ancient instrument works," he says. "Australians, in general, don't treat it as a serious instrument, and the didgeridoo is becoming more popular overseas than here."

He wants to raise public awareness and appreciation of the instrument, and at the same time, of the Aboriginal culture that developed and mastered it, by developing an understanding of its acoustics to the level as other pipe instruments. "Studying the acoustics of the didgeridoo is at the interface between Western scientific and traditional ways of thinking," he suggests. 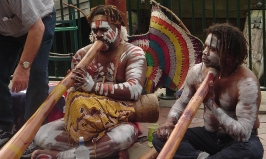 Hollenberg started playing the didgeridoo in 1994 as a way of learning about Aboriginal culture. He has since studied acoustics and, with the help of didgeridoo players and scientific colleagues across a range of disciplines, made significant advances in the understanding of the instrument's acoustics. "As a physicist, I became curious about how the sounds are made," he says. "I searched all the scientific literature, thinking it would all have been worked out. It seemed every other instrument in the world had been studied inside and out, yet I found just two papers on the didgeridoo."

When you listen to a didgeridoo, you hear a constant drone which corresponds to the resonance or acoustics of the didgeridoo itself. The other sounds - like chirps or "animal calls" - emanate from the vocal tract and vocal folds of the body itself. Recently, Hollenberg used a magnetic resonance imaging (MRI) machine to get a scan of the geometry of his mouth cavity and vocal tract while playing two different notes on the didgeridoo - the first time anyone has attempted to produce such images.

To get these images, Hollenberg had to construct a special didgeridoo so he could lie perfectly still in the machine and play the notes long enough to acquire sufficient images to reconstruct "three-dimensional volumes" of his vocal tracts so that the acoustics could be calculated. "For the first time, we will see the human half of the didgeridoo in action," he says.

His co-researchers will also use the data to help Hollenberg model, with a computer, a set of "virtual lips" playing the didgeridoo - something he has already achieved - but this time coupled to the mouth cavity. Hollenberg hopes to build a body of knowledge about the didgeridoo and to undertake a series of public lectures and demonstrations, both in Australia and overseas, on the science, culture and music behind the instrument. "With help from indigenous Australians, this study may also provide some small, yet positive input toward the reconciliation process," he adds, referring to still bitter debate about race relations in that country, and about the need to apologise to the Aborigines for their treatment in the past.